Hedgelaying is a very old practice which is not common in very many countries. Correctly carried out it can provide an impenetrable and stock-proof barrier. Indeed, this is why it was originally carried out before the advent of high tensile stock-net and barbed wire.  Julius Caesar commented in 55BC how such barriers greatly hampered the progress of his mighty legions! It is a skilled job involving cutting the tree stems low down approximately 2/3 of the way through (using billhooks, axes and chainsaws) and then bending the resulting ‘pleachers’ at an angle to form the hedge.  A gappy hedge can be renovated to once again form a dense barrier. If correctly trimmed the hedge may not need laying again for tens of years. It saddens me to see a hedge that I have recently laid being allowed to reach for the sky and not being regularly trimmed to get the hedge to properly thicken up. If not trimmed the hedge will need laying again in but a few years.

I have been hedgelaying in Somerset for a number of years, generally within a 30 mile radius of Taunton in Somerset, and can undertake a variety of styles to suit the customer and the hedge and the budget! I am accredited by, and a member of, the National Hedgelaying Society and learned my trade from working in the Mendips with my friend Colin Clutterbuck (a recent “Supreme Champion” in the National Hedgelaying Society’s annual competition). 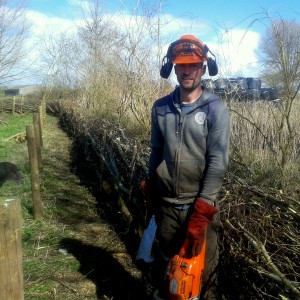 Ben Maughan beside a North Somerset hedge he completed spring 2015.

A North Somerset style hedge in the process of being laid. 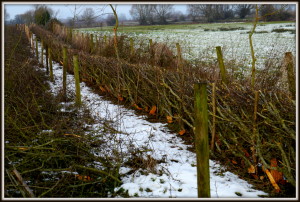